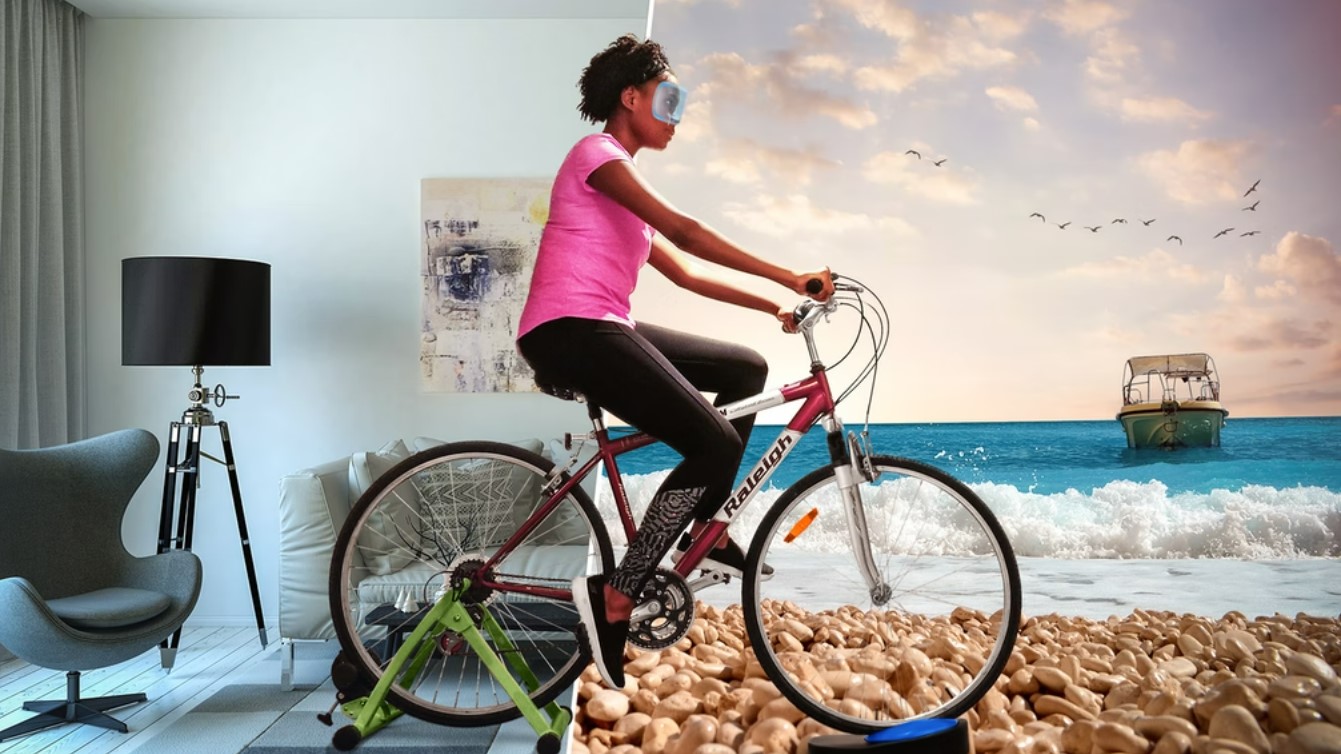 Did you know that you can get a personal trainer who is a ghost! An Autonomous chess board that moves completely on its own Accord Or a bottle of water that tricks your brain into believing you’re drinking whatever you want to be drinking.  From sizzling to searing to straight-up fire, here are some of the hottest tech inventions!

Let’s start with something simple

Blync VR bike: I enjoy cycling, but the roads, dust, traffic, and weather don’t always add up for a pleasant experience, especially with the added worry for safety. Blync has invented a virtual reality system that allows you to link your existing bike to a Blync base, effectively turning it into a static exercise bike with a twist. You use the app to select a location, then strap on a VR headset and cycle around that location. Blync keeps track of your speed and direction. You can look in any direction and go wherever you want. And if that’s not all, you can design your own world to cycle around, as well as invite your friends to cycle together over the network. I wonder what will happen if you fall off a virtual clip hmmm, something to think about!

Now for something that’s rubbish.

Townew Trash Bin: A company called Townew, has created a bin that can detect when your hands are near it and can automatically open the lid. Use thermoplastic sealing technology to seal up the bin bag inside before you have to open the bin and experience the nasty smell yourselves. But that’s not all, once it detects that you have taken out the sealed bag, it realized the need for a replacement, so it dispenses one and inflates it so it’s literally ready to go again straight away.

Ok, many of us were amazed when apple introduced the first-ever iPhone with a multitouch display and no physical keys. Now touchScreens have become increasingly popular, wondering if your outdated monitor can be transformed into a touch display? We’ve found a solution.

BLUEVER Hello X2: The hello X2 is a device that can turn any screen between 10 and 27 inches into a touch screen display. It projects a web of light across the screen, and if a finger interrupts it, the device’s specialized camera can detect the location of the interruption and map it to the corresponding mouse movement. Unlike other touch screens, the way this one works allows you to use it with gloves, a stylus, or even just a pencil. That’s simply fantastic.

Did you know, a computer known as ‘Deep Thought’ became the first of its kind to beat an international champion at Chess in November of 1988 in Long Beach, California. It was created by Feng-Hsiung Hsu and developed at Carnegie Mellon University. Interesting? Wait it just got better.

Phantom chess board:  We already know that chess can be played online, and it’s super convenient, but nothing quite beats the feeling of sitting in front of a physical chessboard. Phantom is an autonomous set that based on a move that someone makes online, can precisely and silently move its pieces whether they are using an app, a computer, or another phantom board. Also, it gets super cool as you can play without even touching it, it has an inbuilt microphone that can listen to the moves, for ex: you can say bishop to G4 and off it will go! Apart from that, Phantom is also a showpiece, you can just leave it alone and it will automatically cycle through 100s of famous chess games of all time.

Moving along, let’s talk about getting an assistant that will not only listen to your command but can also patrol your home and investigate unusual events. Let’s talk about Astro!

Amazon Astro: Amazon’s smart product line started off with Echo, powered by Alexa’s smart audio assistant, Simple. Then they thought ok, let’s make it more visual so out came the Echo show lineup. That had a monitor for displaying information and cameras for recording it. But their latest machine Astro feels less like a virtual assistant and more like an actual assistant. They have taken their face recognition system and mounted it on wheels. They have given it the ability to fire out thousands of little dots across the room and use the information to understand where it is. They have even given it a cup holder to be able to bring drinks to you.  Tell me that’s not the dream! You could Ask Astro to follow you or deliver a message or reminder to someone else. It will hang out nearby and go to the charger dock to top up its battery when needed. You could ask Astro to monitor your home, check out if you left the gas burner on, it can send notifications when there is a glass break among many other features.

Ghost Pacer: Just read the product info: “Maximize your workouts with an on-demand holographic training partner” and it’s what the Ghost Pacer Company is promising as the future of running. They are selling a pair of augmented reality glasses that can effectively project an opponent in front of you with the Idea being you can customize this opponent. For example, if you want to run 5 km in a certain time, you can customize this ghost to a speed that if you run in front of it, you will be able to achieve your time. You can match ghost to your last run so effectively that you can better yourself. Or you can match it to the speed of Usain Bolt. The whole competitive element will always push you to do better. That’s a smart Innovation.

All that running made you thirsty, makes you want to grab a cola. We have got it for you with a healthy twist.

Air- Up water bottle: While most people are focusing on a healthy diet, Air-up has developed a bottle with a scented ring that, when attached to the bottle, gives the impression that you are drinking whatever you want while actually drinking water. The theory makes sense because the nose is responsible for roughly 80% of flavor, which is why it is stated that if you don’t want to eat anything you don’t like, just hold your nose before eating and you will barely taste it. We now finally understand why we used to hold our noses when drinking bitter juices. So now you may drink as much cola as you want without worrying about the calories.

Now something that is really mesmerizing.

Artificial Humans(Samsung Neon AI): I know it sounds like I am speaking out of my mind. But literally, there is a website called “this-person-does-not-exist.com” and every time you refresh the page, it uses AI-powered by StyleGAN, which uses 2 neural networks to fight against each other and learn from each other to develop a face. A shocking realistic face that doesn’t really actually belong to anybody. Samsung has already started running with this technology, they have created a platform called neon AI which is basically digital humans with human mannerisms, human sentences, and in a lot of ways human capabilities. We have got to remember as the world moves more and more online it’s going to matter less who is real and who isn’t, we already have digital influencers like Lil Michaela (@lilmiquela) who has over 3m followers on Instagram, has her own merchandise, It’s not out of the realms of possibility that in the near future we might be able to talk to a concierge, or see a news reporter who looks and sounds like a real person but isn’t. Devendra Parmar
Technical Lead at Innovecture
I am a Software Professional specialized in the design, development and deployment of a software product. Software Engineering is a never-ending puzzle that I am passionately engaged in solving. Outside of work I love to travel, as I believe along with it being an adventure, it provides an opportunity to learn about the culture and traditions.